Being in a metro, you must admit to the fact that the 'busy as a bee' city life is often weary. Same was the case until that friday, when some of my techie friends planned a visit to Bangalore only to hang out. A one day trip was all that we were looking for. Finally, we zeroed in on this place, since it met our planned time window and since my friends were desperately in need for a place which would be pleasent to the eyes and to rejuvenate as well. (You should be in Chennai to realise this anyway !) Though, I had not been to this place previously, a few key strokes in google search and I was there virtually. There were lot of other places that tried to steal our attention, yet we settled down with this one. We were a team of 8, 3 from Bangalore and the other 5 from Chennai. We managed to arrage a cab at the eleventh hour through SRS Travels. It was a Chevy Tavera. Had good travel experience with the car as well as the courteous driver. 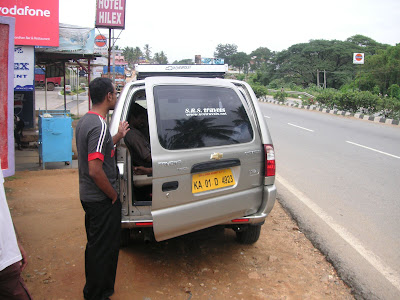 We started around 10AM from kalasipalaya after having our break fast. Journey was along the all time busy 4 lane - Mysore road. H Took frequent breaks on the highways. 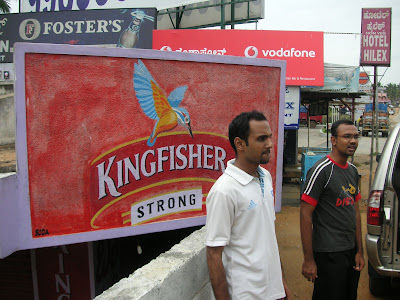 Some blogs advised us to take parcel food as there are no/limited food in Ganganchukki. They were right, we didn't take it serious yet we got some packets of curd rice, the traditional item of South India. And that prove to be the only main course, that we were munching after going there. Food is not available in Ganganchukki/Barachukki. However, you can get some Bajji /Mirchi near the falls.

Finally, we managed to reach the falls at 1:30 PM exactly. The road was average once we left the Mysore road. You have to take a left turn somepoint at the Mysore road. This made the driver to pull back his speed to 65-70 who was easily hitting 90-90 in the Odo. Regarding the Chevy, Ppl at the back seat with lateral arrangemt had a bumpy ride, though I was excused to take the front seats, thanks to my back ache. 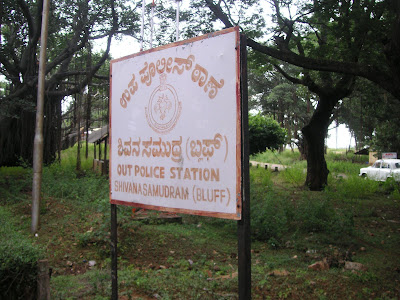 There is a toll gate at the entrance of Shivanasamudra and the path till Ganganchukki is aesthetic. There is a small dam and a man-made gorge that ferries the water along. Gorgeous to look at. As we near the falls, the cry of the falls started buzzing in our ears, increasing its audibility as we move towards it. This was our first glance of the falls. 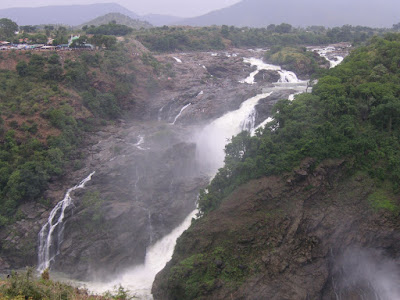 Will continue, the rest of this travelogue in the next post. Watch out !
Posted by Ram Kishore. K at 2:16 PM