Well, this is the continuation of the previous post.
Had a quick hangout with my friends at the Forum, Bangalore this evening. Ah, that was a fine eve once again.

Back to Ganganchukki, we've just reached the spot with the falls right in front of us. Ganganchukki, provided us only with a long shot of the falls. It's just a photo point, fed our digicam with a few shots of it. My cam is not a SLR, so the pics may not be of wallpaper type, but still it's the best in its class and has served me for almost 4 years, a solid loyal companion gifted by my sister !!! 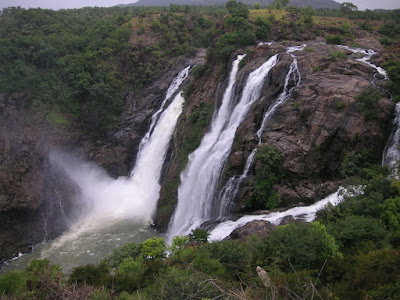 As said, Ganganchukki, just a photo point, got ourself fried in the flash lights for a while, only for a proof of our journey. Oh yeah, the guy with the cap is me. ( Don't ever try to comment okay !! ?? ) 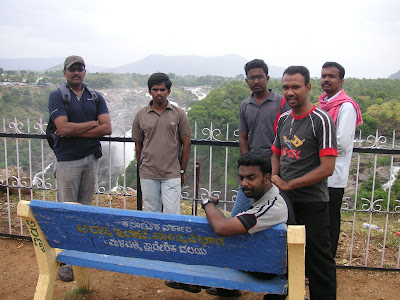 Then we took our car to Barachukki, where we can actually get colse to the gushing waters and for which the tour is all about ! On the way, we were able to spot local residents, different from what we see in Bangalore, bullock carts, houses with clay-tiled roofs. Of course, I'm not the hi-fi type to say that I haven't ever seen a bullock cart, but that one was somthing definitely captive. We also came across a water clad landscape, a river may be, where we spent some time hanging on the twigs and branches of the low lying trees bordering the river. This pic below is a favorite shooting spot for films, where some kannada songs where shot, may be I didnt get this pic at the right angle. 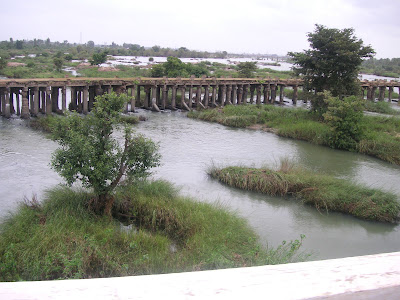 The road being steep and iced with gravel, it took half an hour to reach Barachukki. It was nothing but the same falls from a different perspective. Meanwhile, my friends had found a spot where they immediately unpacked and plunged into the waters. It was a small falls-like formation on the rocks with height of about 15 ft. We had a good time in the clear and cold water. The Sun was kind enough to hide itself behind the clouds for the whole day, sparing most of our energy to help us keep up the rythm. Guys from chennai though from different domicile, were glued to the mini-falls, that it took almost a hour and a half to leave that place.
Pics ?? those are censored !!. Took our only food that we luckily got from Bangalore and proceeded to the lap of the falls. The day being a saturday, there was pretty decent crowd, keeping us occupied. Had snacks like Mirchi Bhaji and stuffs like that. Average. We reached the entrance of the falls, only to know that we have to trek down almost 500 mts along the steps cut on the rocks adjoining the falls. Thank God we already had our heads cooled !! We started trekking down the cliff, while about half way down, none of us were ready to get an inch further as we already were exhausted out. So, we turned back and reached the top and almost drank every drop of water we had with us. Felt like Wayne Rooney, after having played the whole 90 minutes. 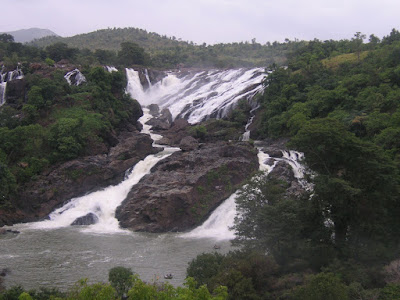 One of my friends insisted in going to Thalakkad, where Cauvery would be in the form of a river. Guys, the road to thalakkad was ready bad. We had lots of fun there, had tea and few of my friends went again for a plunge. Finally we packed up and raced back to Bangalore to reach by 10 PM. Overall, we had a great time for the whole day, a tour to be remembered.