26-JUL-2009
Hello again,
That was a fine Sunday morning. Drowsy as every weekend would be. It was around 11:30 am, that me and my brother-in-law Prasanna, sketched a plan to go to Nandi hills. It would not be that hard to make it as Nandi hills was barely 60 Kms from the place we dwell. This time it was with my BIL's  Santro Xing. My four wheeler license was just about a year old, whereas my BIL's was few months!!. Both of us were not professional drivers, but by that time I got used to those city driving. We started around 11:30, fueled our car, got some snacks and lots of water. BIL not being used to city driving yet, I had to kick the pedals initially. I have a craving craze for cars and can name almost any car on India roads with a mere look. Santro a perfect mid size car, suitable for a nuclear family perfomed good on this track. But still my preference would be for my I10 that we purched almost a year ago. Of course Hyundai I10 was a newbie in the small car segment, whereas Santro has proved its might already. With BSB leaking on the speakers, we zapped through the city roads. Took the outer ring road to reach Hebbal flyover and took a right turn to merge into National Highways 7. NH7 though a four way lane, traffic annoyed us till Yelahanka, making it hard to strike above 60Kmph. Since then, I easily hit a solid 80+ on the odo, with a/c ON with internal circulation, the weather being a bit hot. We were able to spot vendors along the highways selling some unusual fruits on push carts. Far from city, we swapped our seats with my BIL on the pedal. One have to take a sharp left to the state highways 104 (gmap would help), that leads to the mountain. The NH7 ambience was not good and reflects just the city roads. When we hit the state highways, things were different. Farms on both sides. That particular area was famous for grapes and you could see boys selling it on both side of the roads. They even blocked our car only to sell grapes, that we never needed. 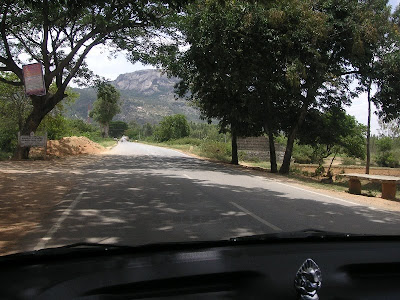 The road was pretty good, but it was not enthralling to see many SUVs zooming past our car leaving back their dust. That road contained few resorts as well, where those cozy SUVs would be heading towards. BIL was hitting between 50-60 just to be careful both being an amateur. One has to take a sharp left again at the end of this road to proceed on State High ways 74, the road that actually leads over the mountains. We started climbing the hills, with BIL still on charge. 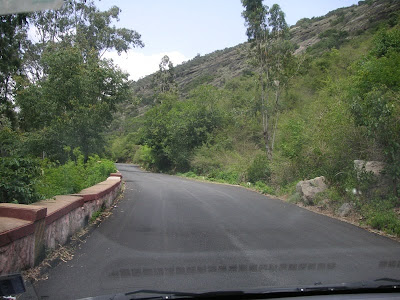 Driving on this stretch requires utmost attention, also with few haripins on the road.  As we moved, we gained altitude, gradually getting a whole new view of the city. Ambeince was stunning. Our heart started pounding faster, when we scrolled over a steep hairpin, BIL got the engine off !! The car started moving backward, the surface being too steep for the brakes to handle. Also, with the engine off, its no more a power break. Felt like heart falling out of our ribs and finally, I pulled the hand lever swiftly immobilizing the car. Thanked the one who found this lever and proceeded further. Cops were constantly scrutinising every vehicle for booze as it's banned on the mountain. So hide it somewhere in the boot, if you'd like one !  Nandi hills, is a small mountain, atop of which there is a temple dedicated to Nandi lord for Hindus. This mountain is also flanked by few smaller mountains, beautiful to gaze. We reached the destination around 1:45 PM. 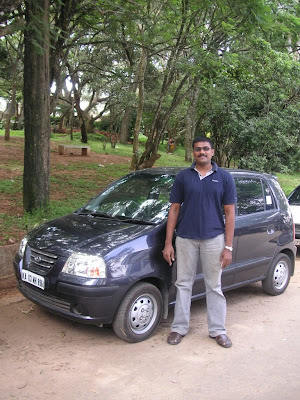 We had some breathtaking view of the city landscape. We also traced the road we travelled (in the pic), hard to believe if that was the one we took with a bus resembling an ant to our eyes. 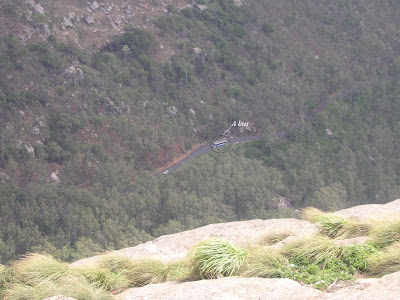 Then, we visited the temple, a small one on the top. The day being a Sunday, the place was too much crowded with familes, couples, friends, lovers etc.. Temple was just like any ordinary temple would be in South India, with rock carvings and statues. 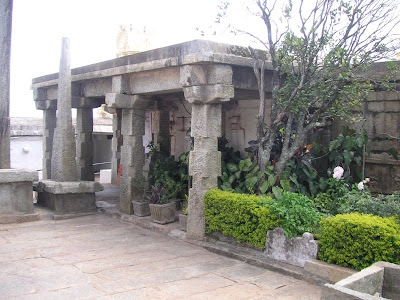 We had our lunch from the hotel that was near the temple, should be one from karnataka tourism dept., was average though. Took few snaps on the mountains. Monkeys literally snatched food stuffs from people's hands and one has to be very careful with those, as a slight slip would land you at the bottom of the hill ! 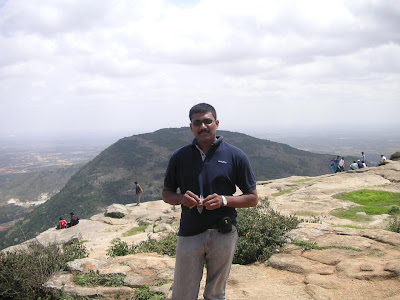 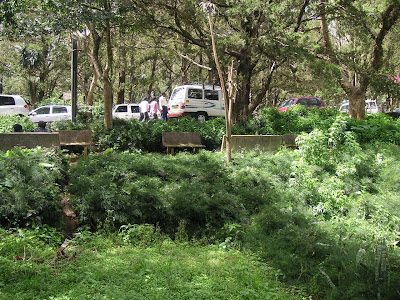 Overall, if you are looking for a place away from city where you can stretch yourself, to test your driving skills,  to push your car's engine to its max then Nandi hills is the right spot. It was pleasant experience.

Dusting out my old CD pouch, more Travelogues to come. Watch Out !!