Hello again,
After a long delay, finally made up my mind to finish this post. This is about my frequent trips to Kannyakumari, also called as the Cape Comorin. This place has got much importance, that it used to be the frequently asked location to be pointed on map during high school exams :) Kannyakumari, is the southern most part of the Indian Peninsula and it's one of the must-visit tourist places in India and is renowned for the Sun Rise and Sun Set view. Its flanked by foreign tourists almost throught the year.

From my hometown, Tirunelveli Kannyakumari is approximately 90 Kms and is well connected by roads. NH-7 is the primary route to reach Kannyakumari from Tirunelveli. This is also one of our favourite and preferred location to hangout with friends, bunking classes. This travelogue would contain a mix of all the trips that I made here. Though we've made a couple of trips with my college dudes on our two-wheelers , I'd be emphasizing the trip that I made with my family. Don't get misled by the pictures because they are taken during different trips and I don't want a new travelogue to be opened for each trip that I make to the same place. It was soon after Pongal- the festival of harvest in India, that we decided to hit the spot with my family and relatives. We took two cars this time, our I10 and my Uncle's Ambassador and we were 10 in head count. I was not yet used to long drive in four wheeler already and my dad wanted me to take charge to teach me some skills.

We started around 4 PM evening and managed to reach Kannyakumari by around 5:30 Pm. If you've read my previous post "Trip to Thirparappu", the major part of the route is the same except for a left turn after"Kaaval Kinaru" leading to Kannyakumari.  (remember we took the right to Nagercoil for heading towards Thirparappu) . This area is known for the wind mills and is planted with a numbers of wind turbines along the high way. 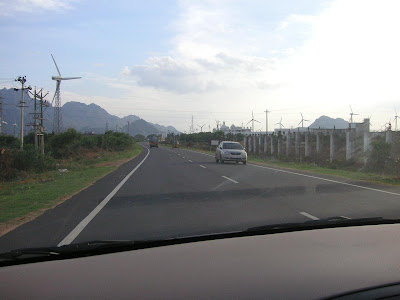 Reaching Kannayakumari after a brief break at Valliyur at about half the distance, it seemed that eve was perfectly set for our visit, with clear skies. 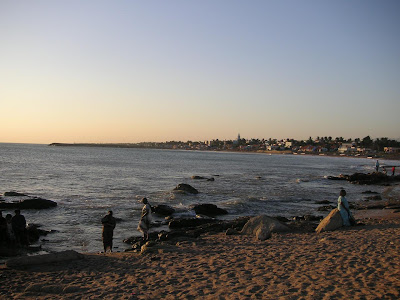 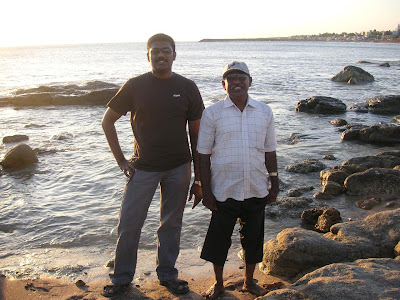 The major attraction here in Kannyakumari is the "Kumari Amman" temple, the Vivekananda Rock, Tiruvalluvar Statue and Gandhi Mandapam.You gotta take a ferry from the shore to reach the Vivekananda rock. The tourist dept. has arranged motorised boats to ferry people to and fro from the rock. However, it's the sole discretion of the management to stop service, if they feel the sea water is too rough to tug. Also, it's banned after evening and no service will be available to the rock post evening. There is a memorial for Swami Vivekananda and it has got a meditation hall in it and some testimonials of Vivekananda. There is also a gigantic statue of the Tamil Poet Tiruvalluvar, that reaches to a height of 133 feet reflecting his works of 133 chapters in Thirukkural. I almost need a new website to describe about this saint, but you still can find lots of information about him and his works in the internet. 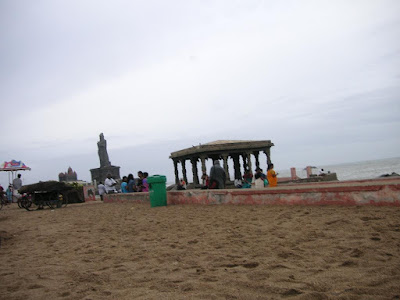 The above picture is a long shot view of the statue and I swear, you cannot capture the statue in a single frame no matter what your camera is capable of. The toenail of the statue would be bigger than your palm !! People taking bath and playing in the seashore is a common sight here. Also importantly, this place is the point where the three major water bodies The Indian Ocean, The Bay of Bengal and The Arabian Sea merger together. It is also said that, the sea when viewed from the view point here, one can spot the three different colors of the ocean representing each, should be beautiful sight. 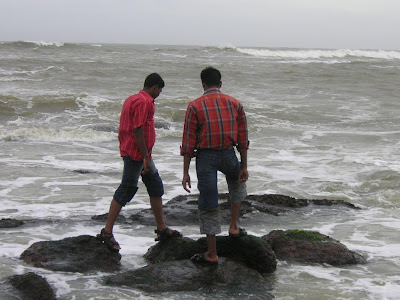 Near the shore, one can find vendors selling eatables, fancy items made of shells and corals and are relatively cheap that you can fill your bags with stuffs by shelling out few bucks, however you gotta bargain at the best. 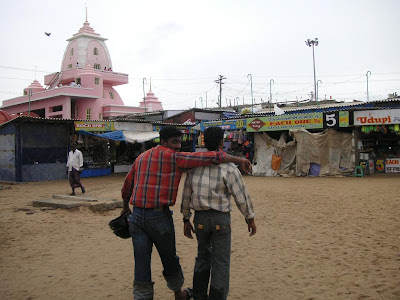 The Gandhi Mandapam is another important place of interest here. It is where the ashes of Mahatma Gandhi was kept for public view, also houses some rare pictures and historical information. The design of this mandapam is quite unique that during October 2'nd (Gandhi's B'day), the sunbeam falls on the place where his ashes were kept. 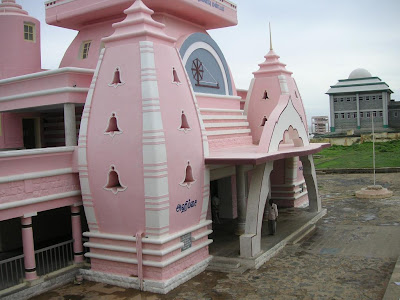 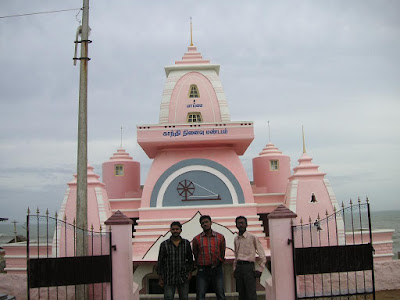 Back to our journey now, it was around 6PM that the crowd gathered towards one direction to get a glimpse of the Sun set. I had been there a number of times previously, but I never ever had a chance to see such a spectacular sun set as this day. Thanks to the clear skies and little crowd !!. 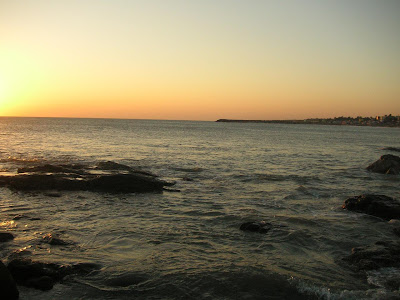 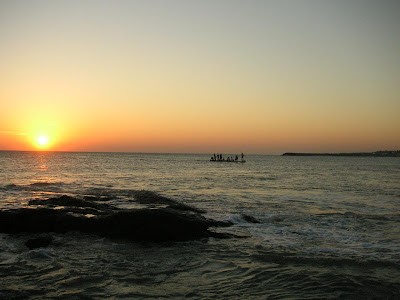 We all stood there awestruck for almost 15 minutes after which the Sun drowned under the seas. We has a good time there and was lucky enough with the skies to get a crystal clear Sunset that day. I don't have any adjectives left and leaving the rest for the pictures to speak ! 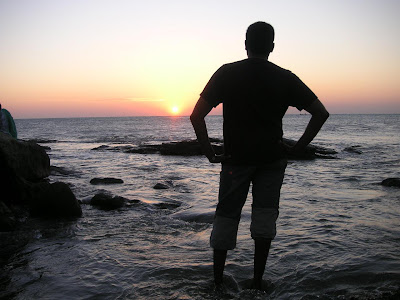 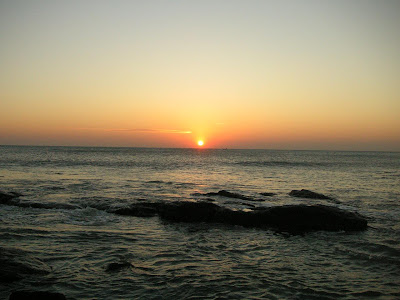 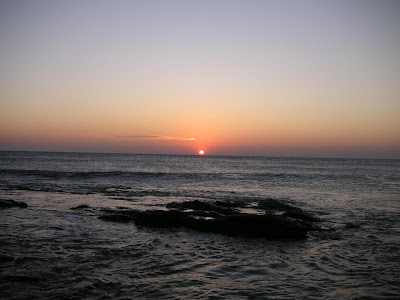 Finally with a satisfied mind and a burdened heart, we packed up, had some refreshments at the restaurants lining the shore, worshiped the goddess "Kumari Amman" and huddled inside our cars to hit the roads back home. 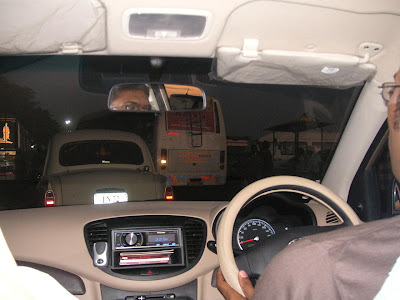 As a whole, no matter which part of the world you dwell, if you visit India Kannyakumari should be at the top in your priority and I assure you, it's worth the time spent here.


More travelogues yet to come, Watch Out !!

Email ThisBlogThis!Share to TwitterShare to FacebookShare to Pinterest
Labels: Kannyakumari