Hello again,
This travelogue is about a day long trip, that we made to Mahabalipuram about 60 Kms from Chennai. I was put up in Chennai then, for almost 20 months since August 07. Had most of my college fellas there in Chennai and it was always fun to hang around with. Spencers plaza, Besant Nagar and Thiruvanmiyur were our frequent weekend destinations.

Mahabalipuram or Mamallapuram, is one of the historic tourist spot, attracting tourists from all over the world throughout the year.
"The beauty of the place is not only due to these architecture but the vast casuarinas trees, the silvery sandy beach the classical hand male crafts around have made them all to form what is a collective splendor. Any visitor who visits mahabalipuram will remain startled and intoxicated with the grandeur. They feel hand hearted and more out from this historical and fascinating tourist spot. "


It's next to impossible to accomodate all the historic information of Mahabalipuram in this blog. More information about this place can be fetched at

I'd be citing excerpts from the net throughout this travelogue rather scripting on my own, as this one being a world heritage site, loads of information are available on the net and it would make more sense this way.


A trip to Mahabalipuram was on our back burner until that Sunday, when we finally implemented it. The crowd, this time being pretty big around eleven, we had hired a van for the trip. We started from Medavakkam around 10:30 AM. The primary route to Mahabalipuram is the scenic East Coast Road (ECR). This is an express highway built along the coast of Bay of Bengal. The roar of the sea can be well heard throughout the entire leg of the journey. Muttukadu, Crocodile park and MGM are other major attractions enroute to Mahabalipuram on the ECR. 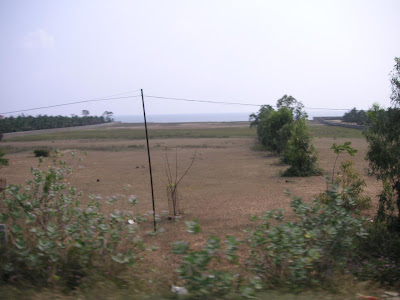 We reached Mahabalipuram at around 11:30 AM. Foreign tourists flock this place in large numbers owning to its rich heritage and importance. We were able to spot tourists taking notes with the help of local guides. Being a major tourist spot, it's well connected with buses from Chennai and there are a lot of shops around ranging from eateries to fancy shops selling ornaments made out of shells.

Chennai, a damn hot place that it used to be, particularly in summer, be sure to carry adequate water that you may topple due to the overwhelming heat. The intense of heat is more pronounced by the reflection from the polished rocks, so beware ! Hire a aircon coach, it's worth the extra bucks spent.

Sculptures and mandapas made of stones are the centre of attraction in Mahabalipuram. Each stone work, depicts some real life stories in history. 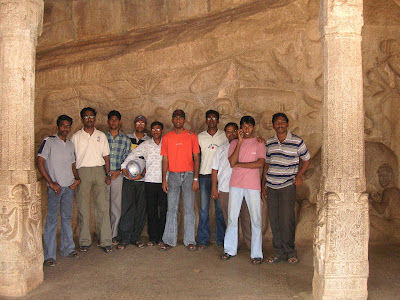 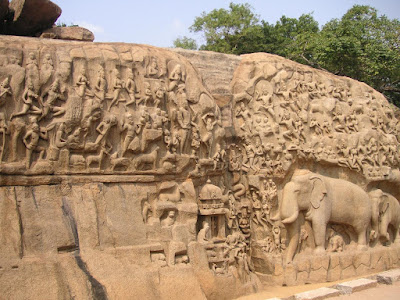 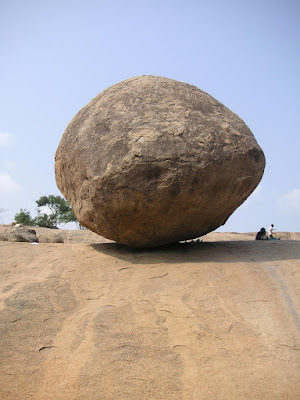 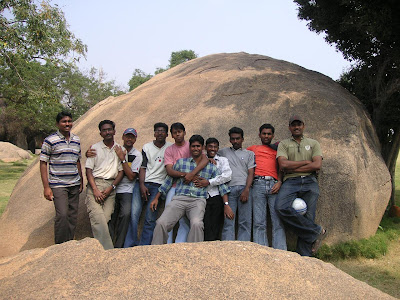 This one was clicked amongst the stone works 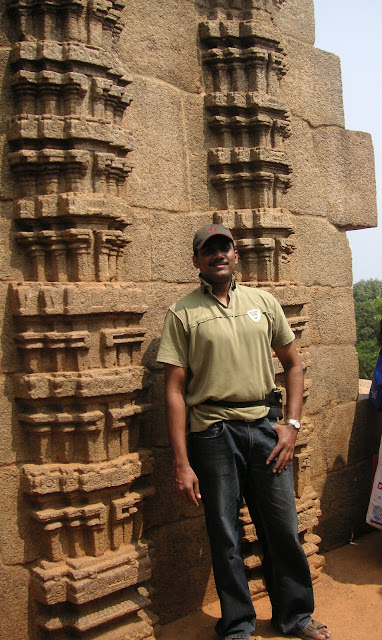 One of the mandapas caved out of rocks 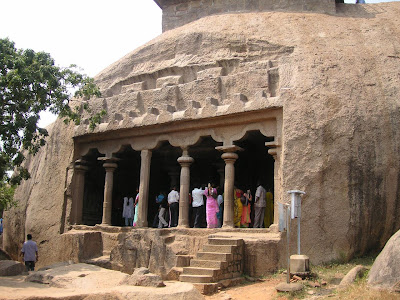 Worried as how your future is gonna be ? Relax, you can get a gist of it ! Let the parrot say it to you... 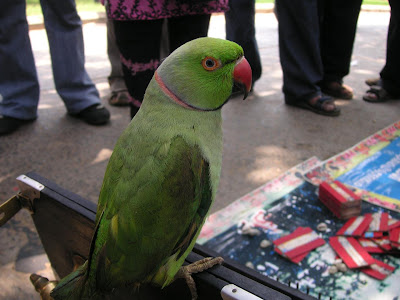 Panch Rathas or The Five Rathas
"These fine rock temples are located in a sandy compound. These five Rathas are the perfect examples of the evolution of Dravidian style architecture. There are built in the shaper of pagodas and they look similar to that of the Buddhist shrines and monasteries. Rathas in English means chariots."  -Excerpt from the net. 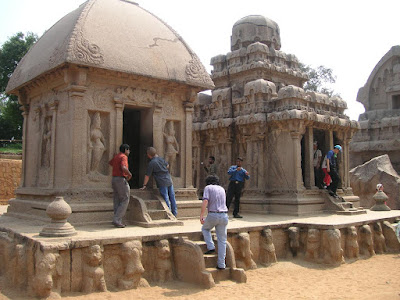 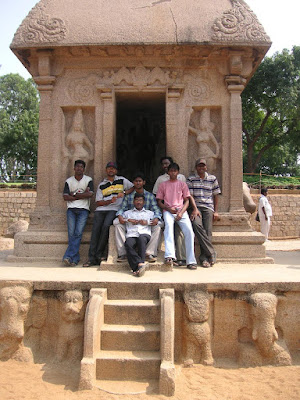 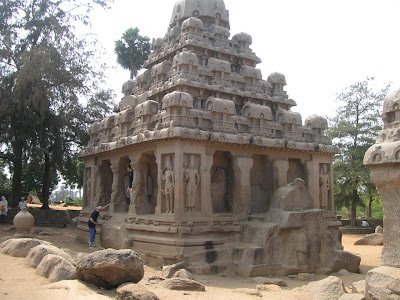 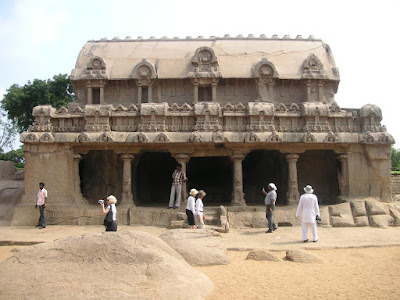 The  Indian Ox sculpted in Rock 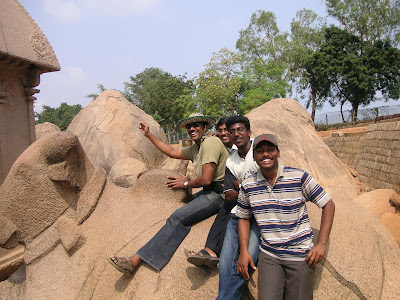 It is said the this elephant is carved out of a single piece of rock. 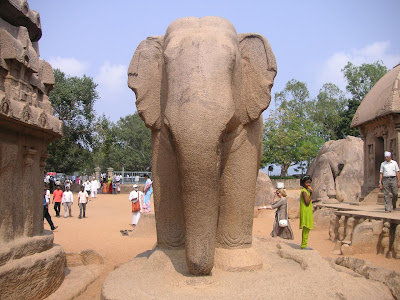 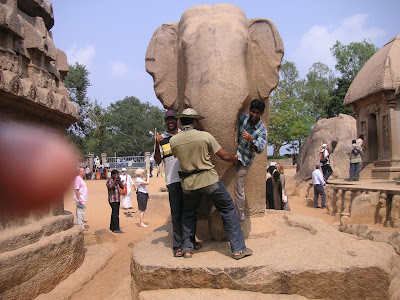 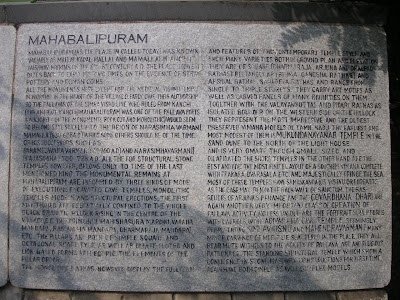 After having all the fun beneath the rocks, we made it to the Shore Temple. "The temple, standing as it is on the coast for over a thousand years with most of its sculptures having been eroded, due to saline action but leaving vestiges here and there, mere outlines, shines in its pristine glory".

"This temple is the most complex group of all the temples of south India, having two shrines placed one behind the other, one facing east and the other west. These two shrines are separated by a rectangular shrine sandwiched in between and having its entrance from the side. This shrine is dedicated to Vishnu, who is represented as lying on his serpent couch and known as Talasayana Perumal. The other two shrines are dedicated to Siva. There is a large open court at the western end."
- Excerpts 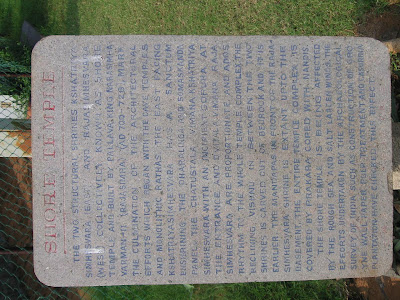 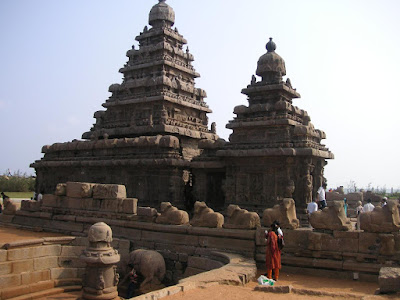 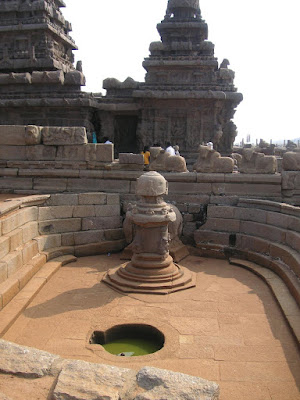 View from the front. 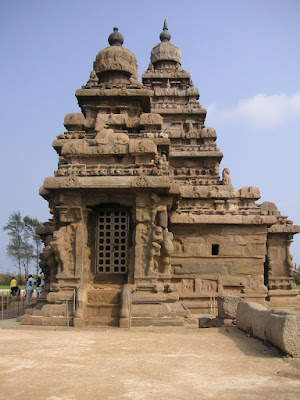 We had loads of fun there. Never forget to had a game of Fifa Street on the shore. It was an enthralling experience overall, except for the Sun who was ferocious on us envying our enthusiasm. If you travelling to Chennai by any chance, Mahabalipuram is a must visit place atleast once in your trip. 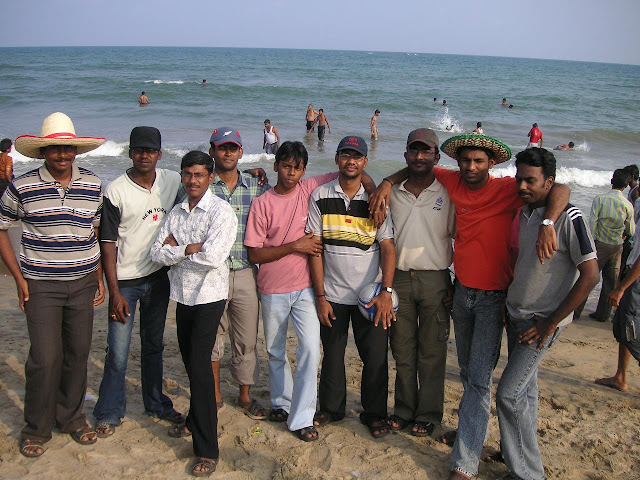 Email ThisBlogThis!Share to TwitterShare to FacebookShare to Pinterest
Labels: Mahabalipuram