Hi,
This is about a short trip to Crocodile park located about 40Kms from Chennai city. It was a typical bachelor life for me in Chennai then. Lousy weekdays, frequent filter coffees, enticing weekends, the usual break out trips to beaches at outskirts , it was fun. It's very hard to kill time in weekends, as the land breeze's heat wave forces you to lock you up in your room all the day.  Evenings would be moderate with the sea breeze taking stage.

Organizing a get-together would often end up in vain, thanks to the sultry weather a prefect excuse for pals to refrain from hitting the roads. But this time four of us (Me, Sam, Abraham and Ramesh) finally decided to zero in on Crocodile Park. Reason one, the park is located within a comfortable 35KM radar and second being the scenic and smooth East coast Road lining the Ocean, Bay of Bengal. I had already mentioned about this road in my previous post Trip to Mahabalipuram.

We met at Medavakkam, where few of my friends are put up in an apartment. Having had all the usual pranks and flirts, we started around half past two in the afternoon on our two bikes. Medavakkam -- > Sholinganallur -- > ECR Road --> Crocodile Park. Forgive me for the image clarity, as these pics were shot from my mobile camera. 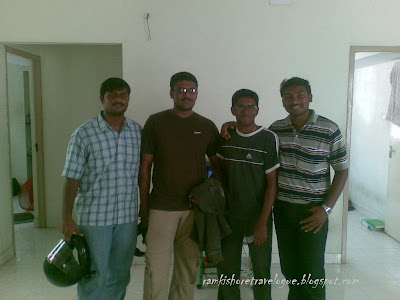 As usual, the Sun started pouring in and humidity too joined hands in tiring us down. It was highly difficult to brave the heat, though sips of beverages helped. Our first break was at Muttukadu, a place where TTDC has setup a boat ferry to enjoy the only backwater that Chennai boasts. Read more about Muttukadu here. Out intention was to hit Crocodile park and hence kicked our engines again, swearing to experience Muttukadu on our way back.

Within few miles, we reached Crocodile Bank. Being a Sunday, crowd was in large to this park. After paying a nominal entry fee we skidded in. The park was properly maintained and was especially neat. This park also houses varieties snakes species and turtles, a thrilling experience for kids. Also, the dense trees in the park shielded us from the scorching sun. 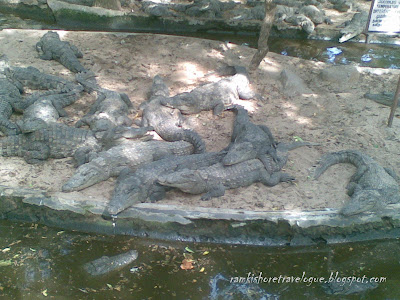 There were crocodiles everywhere (what else would be in a crocodile park ??!! ), small, large and gigantic, belonging to different breeds. Some enjoying the visitors, few fighting with one another and the rest standing as still as a rock. It is said that crocs' after popping out of water, to maintain its internal body temperature, lie on the ground with its mouth wide open and stays still for hours together. 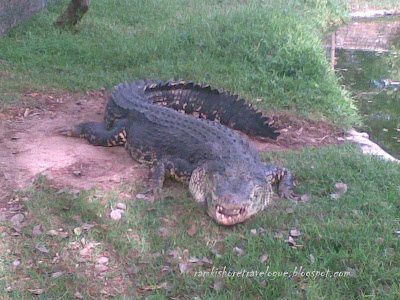 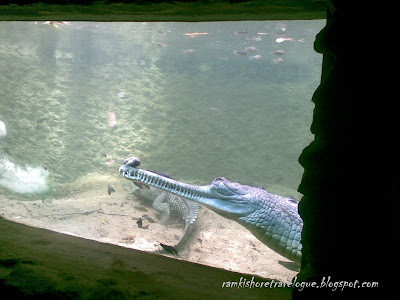 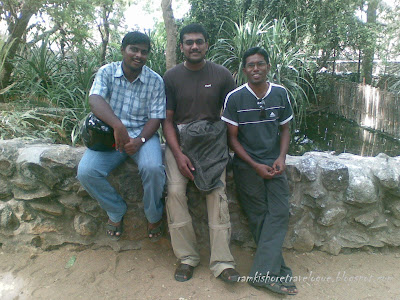 Sam also encountered a dangerous and venomous animal in the park. OMG !! 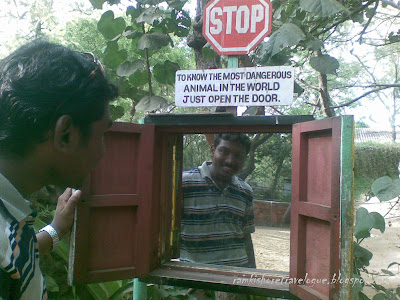 Videos with 'never say don't know' Abraham's comments. !
You can also take snaps with tiny crocodiles and snakes. The management levies a charge to 'mingle' with little animals in the park. You can take a snap with viper hugging your neck or hold a little alligator by your hand !! Sheer fun ! If you are at the right time, then you can see the zoo keeper feeding the crocodiles with raw beef. A time when the ever static crocodiles, plunge into action !! And yes, if you are ready to pay for the meat, you can feed them too, at any time !! 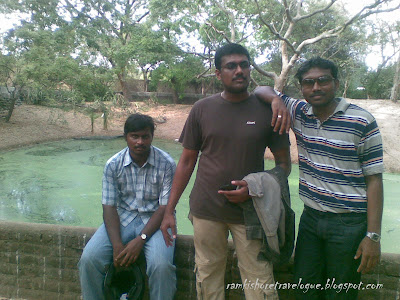 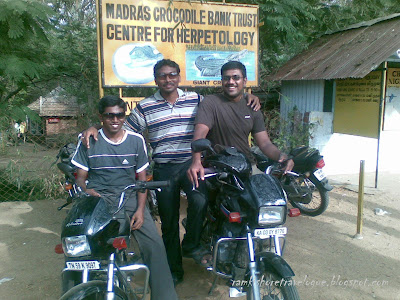 It was fun in the park with guys making funny noises to provoke the crocodile, that went in vain ! We left the place shortly and travelled back to Muttukadu, the boat house. 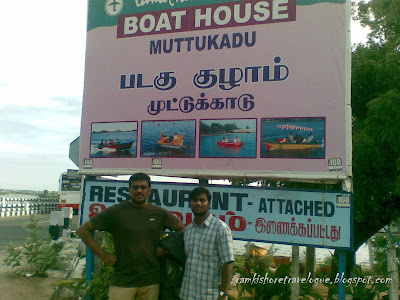 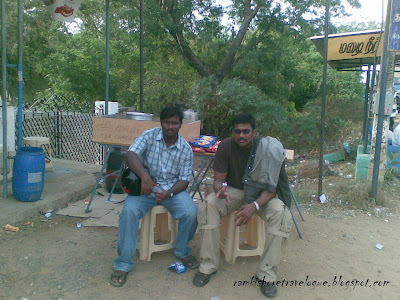 Sam and Ramesh had loads of fun with the boats, while me and Abraham preferred to be offshore ! The sun had already drained up our entire energy by the time we started back. However, it was a perfect spot for killing your weekend time, once in a while. Crocodile bank and Muttukkadu are popular tourist destinations in Chennai and don't ever dare to miss it !!
More interesting travelogues to come.
Watch out !!.
Posted by Ram Kishore. K at 9:32 AM